How to diversify your algorithmic Spotify playlists

Do you want to listen to different kinds of artists on Spotify and simultaneously raise a middle finger to systemic racism? Here's how.

A version of this post originally appeared in the June 18, 2020 issue with the email subject line "Intentionally diversifying your algorithms."

I am a music fan, have been for decades. At fifteen I subscribed to Spin and Rolling Stone and spent hours reading and listening to CDs I bought through Columbia House. As my fandom in the late 90s evolved, I went to record stores and bought Japanese-import Radiohead singles just to get the b-sides. I spent all my allowance and then my wages on records. I chose my college because I wanted to be in a place with a good music scene. I ruined computers because I downloaded too many MP3s with viruses attached.

Now I can’t wait until I can safely go to a concert again. I buy new records on vinyl, and I read Pitchfork on the daily out of habit. But more than anything I fucking love the celestial jukebox, aka my Spotify account.

After five years of regularly listening and making playlists through Spotify, my algorithm knows what I like. It can predict my fussy-but-broad taste better than my partner. It’s just as good as Netflix’s recommendation algorithm used to be, back when I could rate every movie with 5 stars.

I wouldn’t say that I’m in love with Spotify’s algorithm. I would have a hard time suddenly living without it, though.

For the unfamiliar, Spotify’s algorithm assesses your past listening habits, the artists you follow, the playlists you make, and spits out highly personalized recommendations via an assortment of mixes, updated daily, weekly, monthly, annually. Here’s a primer on how a one-off Summer Rewind mix was algorithmically compiled from back in 2017.

Since I went freelance a year ago, I’ve relied on Spotify’s Daily Mixes to soundtrack my workday. Spotify is wonderfully transparent about the algorithmic factors* that comprise the six individual daily mixes. That system, Exploit and Explore, go deeper into what each user already likes (Exploit) and recommends based on what other users with similar taste like (Explore).

But the problem: the mixes only reflect my very recent listening habits. So if I haven’t been listening to a diverse array of artists recently, and if other people who listen to the same artists don’t have a diverse roster on their own lists, the mixes get very one-note.

In my experience, Spotify is good at recommending a diverse array of new artists for songs that have been released in the past 10 years. Spotify’s recommendations algorithms have been called out for sexism in the past, but for the most part I’ve found recommendations from the service to be way more diverse than, say, an ex-boyfriend who claimed to love music but really listened to different iterations of the same sad bastard folk ad nauseam.

During the Old New Normal (the “only a pandemic before the global fight for civil rights” normal), I was listening to what I’d call comfort-anxiety music. Music that reflects my societal paranoia. A lot of what I liked as a teenager: Fiona Apple, Smashing Pumpkins, Radiohead. A surprising amount of Jeff Buckley.

It’s music that very intentionally doesn’t surprise or particularly challenge me. I love a lot of new music that comes out, but I don’t always have the brain space for new sounds, especially during workdays.

Since I couldn’t go out, I streamed my favorite new wave dance night through Twitch, Shazamed those songs, listened to them on Spotify, went down a rabbit hole to a bunch of ’80s records: Talking Heads, Bow Wow Wow, Adam & the Ants.

Notice anything about the artists above? They’re mostly white.

With the local and global reckoning with systematic racism, I’ve been intentionally expanding my reading and watch lists to include far more BIPOC artists and creators. I had listened to the Black Lives Matter playlist on Spotify, delved into many of those artists whose statements feed and challenge and inspire my thoughts. But I also want to diversify my passive listening, the music that fills my headphones when I’m working, my comfort-anxiety music. You know, the old stuff.

Around May 31, I looked at my Daily Mixes in a little bit of horror: aside from the one Daily Mix with Lizzo and Solange, why were all of my daily playlists so very white? Hadn’t I been listening to any music from people of color at all?

When dealing with the music of the past, Spotify’s recommendation engine still follows the tastes of the mostly white music writers, DJs and tastemakers who defined rock music in the 20th century. On occasion, the Spotify algorithm will recommend Chuck Berry after a Rolling Stones song, but it mostly sticks to The Beatles.

I mean, I’m listening to 80s pop music that directly appropriates the Burundi beat, so why am I not seeing the Black artists who inspired the bands I like in my Spotify Daily Mixes?

It’s more evident in New York new wave bands, which drew from endless Black genres: rap, hiphop disco rest on the surface of all the art school glam musicians like Bowie, The New York Dolls, and The Talking Heads/Tom Tom Club. And for their part, the Talking Heads’ David Byrne, Chris Frantz and Tina Weymouth hired Black musicians and spoke about their direct influences in interviews; it’s all very well-documented stuff. Why don’t those influences that my favorite bands appropriated show up in my recommendations?

Blondie’s “Rapture” draws from Black artists in funk, disco, and, of course, Debbie Harry’s marvelously awkward rap, during which she name-checks Fab 5 Freddy and Grandmaster Flash. The song directly draws lines between New York’s Black artists and genres and whitewashes them for popular appeal: “Rapture” was the first no. 1 song in the U.S. to feature rap vocals. Debbie Harry had no malicious intent in rapping her way to number one, but her work was based on Black artists in the city who would never rise to that kind of prominence.

And, y’know, maybe I’d like to listen to more of those musicians, those beats that Blondie interpolated into their own mix.

But here are the related songs Spotify picks for me based on “Rapture”:

Fucking Eminem?!? I’m glad they the algo threw Billie Holiday in there for good measure, but literally Grandmaster Flash would be the easiest option for a “you would also like.” Maybe throw in some Funkadelic for good measure. There are far deeper influences than those basics, and I’d love to hear them.

Those algorithmically generated recommendations are somewhat shaped by my previous picks and taste (good friends will snicker because of course my algo would recommend Pulp), but if I’ve ever listened to an Eminem song on Spotify I’d be shocked. I do not care for Mr. Mathers in any iteration.

Recommendation algorithms like Spotify’s replicate the racist assumptions of the gatekeepers of the past. The racism is not intentional — at best it’s truly “colorblind,” since I doubt Spotify’s algorithm draws from metadata that specifies race. But it’s absolutely reiterating systemic racism, since the entire music industry continues to classify music in race-based terms. (Urban contemporary is still a Grammy category FFS.)

The algorithm tends to link artists the way they have always been grouped: in little high school cafeteria lunchtables of taste, where the rap kids don’t talk to the rock kids, and the rock kids don’t listen to Black artists aside from Jimi Hendrix. Public Enemy and Blondie absolutely will never sit at the same table, even though they arose from the same environment and share many common factors.

As such, the music industry’s racism reinforces itself, in playlists of old favorites, even when we have seemingly infinite choice and access to all of their influences.

The thing I love about pop music now is its genre-bending, and I adore that Spotify’s playlists of new songs tend to break music down based on mood rather than genre. But I also want that diversity to extend back when I’m listening to older music. I don’t want an algorithm from that milquetoast rockist ex; I want a more diverse algorithm!

Diversifying your algorithms and mine: Four easy steps to broaden your listening pool even if you prefer older music.

Luckily the other great thing about Spotify is its seeming limitlessness of catalog. Unlimited by bandwidth or storage space or paycheck or time, I can listen to whatever I want to listen to. Celestial jukebox. Infinite playlists of as many artists as I can handle.

So I’m making them longer by diversifying, hoping that the algorithm picks up on my intentions. Here’s how:

Spotify’s algorithm supposedly takes my expanded playlists, which now include more Black artists. Great, Exploit my tastes. Maybe one day, they will be presented back for others to Explore as well.

(If you’re at all curious, you can follow me on Spotify here.) 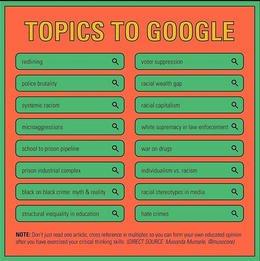 Is Google a good place to find resources about social activism and anti-racism? 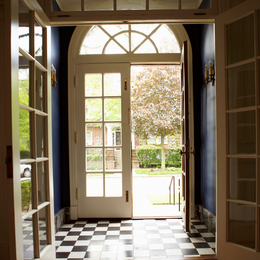