a year ago by Deborah Carver — 3 min read

In the tradition of other semi-informative line graphs: Pinterest Trends review

This post originally appeared in the January 16, 2020 issue with the email subject line "We have begun our initial descent" and an analysis of Netflix's new content consumption KPI.

The downsides: “Historically” is not an accurate descriptor. Users can only access the past year of data, which means showing annual seasonal trends or almost any time-based comparison. And the data is only from 2019. Like, Google Trends data, it’s only comparative and not absolute.

The big however: When it hangs out with its older, cooler step-sibling, it has a lotta potential.

Pinterest Trends enables comparison of up to four Pinterest search terms at a time, so you can see which Zodiac sign’s tattoos are most highly searched throughout the year (Gemini, by a long shot. Followed by Scorpio and Taurus).

It’s a cute, fun little story, especially when you look at the spike in the week of September 19. (Can’t find any Zodiac tattoo-related news stories for September and National Tattoo Day is in July, so my best quick guess is those searches were guided by some kind of editorial, most likely on Pinterest itself.)

But when you compare it to search data on Google Trends, you can see more nuances. Leo and Pisces, neither of which made much of an impact on Pinterest last year, are the most two popular Zodiac tattoo in Google for several years running. (Scorpio and Taurus still rate highly). And on September 19, 2019, we can see a small spike in all “[sign] tattoo” searches on Google — although not as high as in previous years.

I’d wager that the equinox inspired some tattoo-related editorial that drove the light spike. The 9/19 spike was higher in 2019 compared to other years because of astrology’s relative popularity.*

Alone, the Pinterest Trends data isn’t much fun at all. Kindof like Pinterest. Sure, it’s an idea, but not anything you could actually do anything with.

But Pinterest Trends data is brighter and bolder in the context of Google Trends. And I’ll bite. I’m not gonna use the story to make choices with consequences, but the idea is far more appealing.

Perhaps Pinterest will organize and release more than a year of data. And then we can start making deeper comparisons, distilling thoughts about how people use one search engine compared with another, or a more rudimentary visual search versus a text-based one.

Regardless, the story above has slightly more weight than judging a feature film’s popularity based on on two minutes of viewing. Not a ton, but, like, enough.

*Other data story notes: “Astrology” trends down on Google Trends over time, but more detailed astrology-related phrases. Most people who are interested in astrology don’t search “astrology”; they search “birth chart” and “rising sign” and “pisces tattoo.”

The ultimate guide to better branded SEO in only 5 steps

Affordable media monitoring for brands of all sizes: Brand24 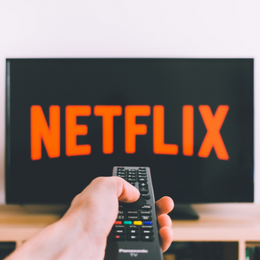