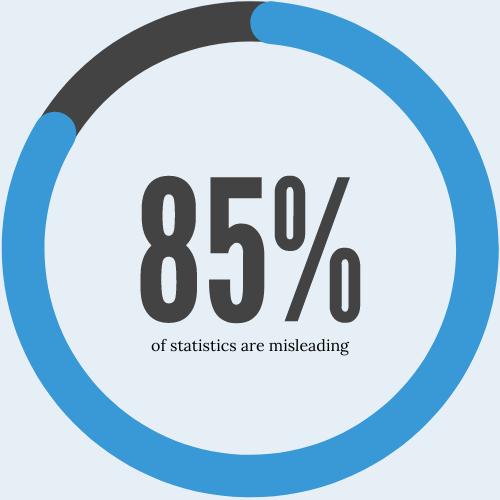 Big marketing stats with no context are (defeatable) monsters

A version of this post originally appeared in the October 22, 2020 issue with the email subject line "Scary monsters and super creeps" and a review of video screen-capture software Loom.

Last week I was in a meeting where someone argued the following point as a case for maintaining high levels of personalization in ad tech: “70% of Hulu subscribers do not opt out of ads even though they option is available to them, and studies say 63% of people prefer targeted advertising.”

When I hear stats like these, which are usually repeated out of context with no sourcing, methodology, or dates, I freeze up. They’re often a red flag that nuance and design intentionality are going to go out the window in favor of “majority rule.”

Big stats are nothing new to marketing and business, and I’ve been known to throw around a few myself (although usually I’m also shouting “That’s what Pew says!” along with the data point). Statistics and data are fantastic to support an argument when they’re applicable to the conversation at hand.

Most of the time, however, the big stats are hot air. I’ve written before about the dangers of data we don’t understand, including:

In the United States, until this year, most of the data we regularly consume is related to our deeply flawed and fragile electoral system. Our grade school-level training in democracy and leads us to think that if we have a data point that proves more than 50% of people prefer X over Y, or there’s a plurality among three choices, we’ve won the election. There are no other choices; the winningest preference decides, no matter the externalities.

Building products and content for people is not a winner-take-all mandate. A democratic election isn’t even a mandate to ignore dissenting preferences, regardless of politicians and horse-race news coverage and all the rest. Unfortunately, our professional conversations in the age of data excess and growth hacking don’t often reflect our ability to understand complex narratives.

Many of us hold dear the principles of accessibility, in which products are designed for as many people as possible, regardless of ability, circumstance or internet speed. In my interpretation, accessibility also extends to comfort and consent: if a significant number of people express concern about a major change or circumstance, especially one they can’t reasonably opt out of or control, keeping technology and media accessible and functional means listening to and incorporating those concerns into the larger conversation.

Just show me what you did real quick: Loom review