How are algorithms portrayed on tv, and how does that compare with how they actually work?

This post contains a mild spoiler for HBOMax's Barry, episode 5: "crazytimesh*tshow." Unless you're a rabid Barry fan who hasn't watched the episode 3 weeks after it aired, you shouldn't be too shocked. Also, I haven't watched past episode 5, so maybe my point gets even developed further across the rest of the seasons, but considering it's the C plot in a single episode, I doubt it goes anywhere else.

In the early 2000s I avoided watching ER with my medical student sister. She would comment every time the story was medically or professionally inaccurate, and I rolled my eyes. As with most fiction, the professional details didn't matter as long as the story was good and the universe remained consistent.

These days I find myself making the same kinds of nitpicky comments when I watch tv shows whose plots hinge on algorithmic decision-making. In contemporary storytelling, algorithms are a convenient deus ex machina, an inscrutable event that changes the story in the blink of an eye. In television and movie narratives, feeds represent an environment beyond a character's control, the codification of systemic failure. Algorithms take on the role bureaucracy and elite gatekeepers played in 20th century novels and dramas. In fiction, algorithms are near universally flippant, negative, the uncaring and punishing god of pure capitalism.

Barry is very peak TV, a half-hour dark comedy that's 90% about a professional killer coping with his murderous nature, standard antihero stuff. But Barry has a girlfriend, and that girlfriend dallies with an algorithm, and suddenly it's relevant to this newsletter.

In season 3, episode 5, the character Sally, self-serious and comically obtuse, has pored her heart and soul into creating her own TV series. She is the writer, director and lead actress; her face is literally the advertising thumbnail for the show. At the show's premiere, she learns that her work has received a 98% rating on Rotten Tomatoes, and she's ecstatic.

The following morning, she gazes at her own face as the streaming service's hero image when her show suddenly disappears. Her work is nowhere to be found on the service. At a meeting with a streaming executive, Sally is informed that her show has been cancelled, less than twelve hours after it premiered.

Sally, stymied, argues that her Rotten Tomatoes metric proves it's worth everyone's time, that it barely had a chance to reach its core audience. After all, the network invested time and money into Sally's project. But in this case, the critical aggregator metric (Rotten Tomatoes) doesn't stand a chance against the predicted return on investment (the streaming network's proprietary black box of data).

The audience identifies with Sally's indignation at the algorithm's swift dismissal of her art. It's a familiar feeling for writers and creators, the algorithm that deems content unworthy of pursuing. I love the executive's language in her dismissal: "The algorithm felt," reflecting both how executives occasionally speak and the godlike deterministic power businesses can give to algorithms.

But Sally's attachment to her own KPI, also a black box of dubious merit, is equally unfortunate. I know Rotten Tomatoes holds some clout in the entertainment industry for measuring critical praise, but it's every bit as problematic and arbitrary as every other ranking algorithm. It's just a single point in the plot, and it's never the whole story. 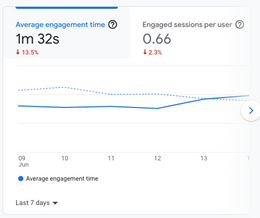